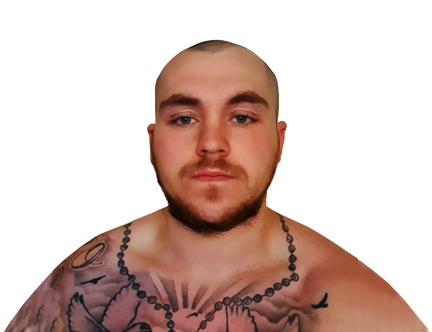 Jack Draper was 10 years old when he first became interested in boxing. Jack trained on and off until his first boxing match when he was 17 years old. Jack has 12 boxing matches under his belt with 8 wins and 4 loses. In bare-knuckle bouts, Jack has had had 4 matches with 3 wins and 1 draw.

” I had a loving childhood growing up with plenty of family around me. My dad is well known in my town and he was a proper fighting man. I used to love hearing all his stories while growing up. He never wanted me to become a fighter, but growing up I was always around fighters that my dad knew. One of his best friends is Johnny Armour, W.B.U bantamweight champion of the world. Meeting him was what got me into boxing when I was a lad.

Although I’ve had a loving family growing up, I was bullied all the time at school. I was “the fat kid” so I was an easy target. The bullying was never physical; only mental. But things got so bad that one day I tried to hang myself with my school necktie that I fastened around my bedpost. Fortunately, the bedpost snapped. From the moment I hit the floor, my outlook on life changed and I began to fight back.”